First off, let me say how disappointed I am in the ix4-200d product. I've had it a year in a half and was initially hoping to use it for testing and virtual machines. Its slow performance via SMB and iSCSI made it useless for these features. I was lucky to get 20 MB per sec during my initial testing.

I've used it for backup of my workstation using robocopy in a scheduled task once a week of all my primary partitions ever since - a sort of peace of mind backup system. I also had set this unit up for e-mail to notify me of any issues or RAID issues.

I received an error of disk 3 failing a few days ago and contacted Iomega. Longer story short - register the product within 90 days of purchase and save your proof of registration or Iomega will throw you in the cold. 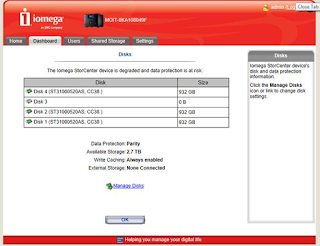 My colleague gave me a used 1.5 TB disk and used it to replace the failed disk. After turning the unit back on, and logging into the web interface, I received this error: 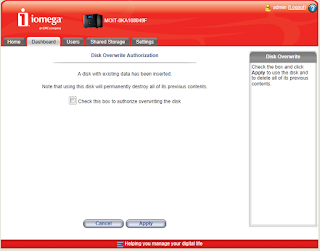 So, I clicked I agree to overwrite, but once again I was greeted with the same error over and over.

No big deal, I have SSH access from playing with it previously to configure Ethernet teaming (to squeeze more speed which did nothing). Here's a tutorial to enable SSH - http://iomega.nas-central.org/wiki/Root_access_enabling_(Home_Media_CE)

Hey Justin - fighting a failed drive on my ix4-200d myself at the moment. Do you happen to know if you can hot swap a failed drive in this thing, or better to shut it down when swapping a disk?

I pulled out all of the drives from my Ix4-200D and now they are all mixed up. what order do they go in?